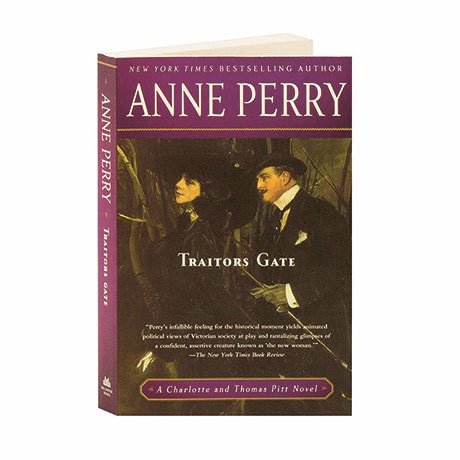 No one else re-creates the gas-lit atmosphere of Victorian London quite like Edgar Award winner Anne Perry. In her Charlotte and Thomas Pitt mysteries, the shrewd inspector and his clever society wife together root out murderers in the most elegant and the most squalid neighborhoods of the city. (blurb) Someone in the Colonial Office is passing secrets to Germany about England's affairs in Africa, in this 15th novel in the series (the sequel to The Hyde Park Headsman). Yet while Superintendent Thomas Pitt investigates this matter of treason, he is also quietly looking into the death of his childhood mentor Sir Arthur Desmond. Pitt believes that Desmond was murdered, and suspects that the crimes are connected—and after an aristocratic society beauty is found floating near Traitors Gate, he and his clever wife Charlotte begin to see a pattern of tragedy and monstrous evil.