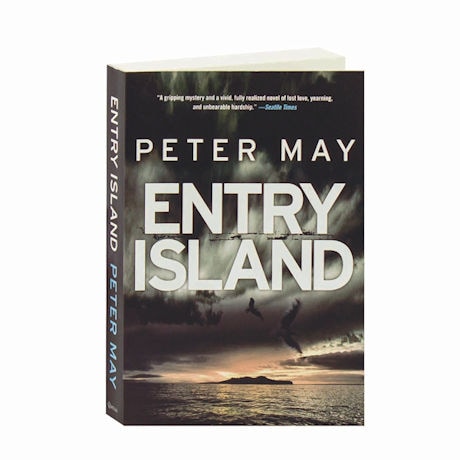 Following his stunning trilogy of suspense novels set on the Scottish Isle of Lewis, Peter May won the 2014 Deanston Scottish Crime Novel of the Year Award and France's Trophée 813 for Best Foreign Crime Novel of 2015 with this standalone novel set on a tiny island off the coast of Quebec. Entry Island is home to barely more than 100 inhabitants, the wealthiest of whom has been found murdered in his home, with his wife covered in his blood. Insomniac homicide detective Sime Mackenzie, part of an investigation team from Montreal, is electrified by the man's melancholy widow, and convinced he has met her before. His sleepless nights are punctuated by vivid hallucinations of her, and himself, in a distant past in Scotland.

"Mackenzie's dreams of 19th-century Scottish crofters (farmers) and their doomed struggle with powerful landowners, a conflict known as the Highland Clearances, which directly affected his ancestors and perhaps Kirsty's too, provide a powerful counterpoint to the present-day story line."—Publishers Weekly

"A Gordian-knotted plot.... The final result is a fascinating glimpse into a shameful and frequently overlooked aspect of British history. The author has followed the ties that spread out from the Hebrides to the strong Scottish Gaelic-speaking communities on North America's eastern seaboard and used them to embellish a modern murder mystery."—Independent (London)