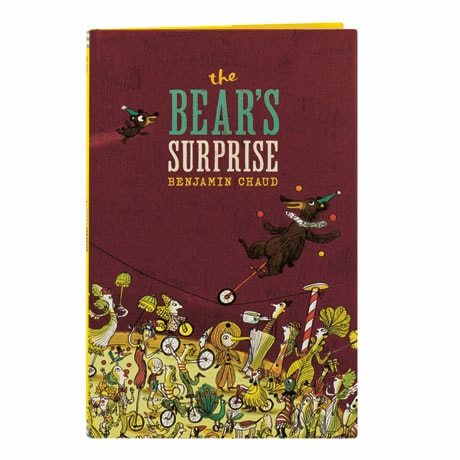 Utterly charming. First published in France, the book series that began with The Bear's Song sits between Babar and Busytown on the shelf of children's classics, with delightful echoes of both, yet possesses a quirky spirit all its own. Benjamin Chaud's tales of intrepid Papa Bear and Little Bear are full of oddly beguiling characters and crowded scenes of good-natured mayhem, in elegantly tall oversized editions that allow readers up to 8 (and any age, really) to immerse themselves in a richly imagined world.

Surprising indeed! Little Bear wakes up in the spring, but where is Papa Bear? Through the forest Little Bear goes, into a mysterious cave of wonders, and comes out in the middle of—a circus! Papa is pedaling along on the high wire, and the applause inspires Little Bear to join him. But bigger surprises await, in this follow-up to The Bear's Sea Escape, with die cut windows in the pages that reveal just a bit of what's happening in the next scene.