Front Porch Politics: The Forgotten Heyday of American Activism in the 1970s and 1980s 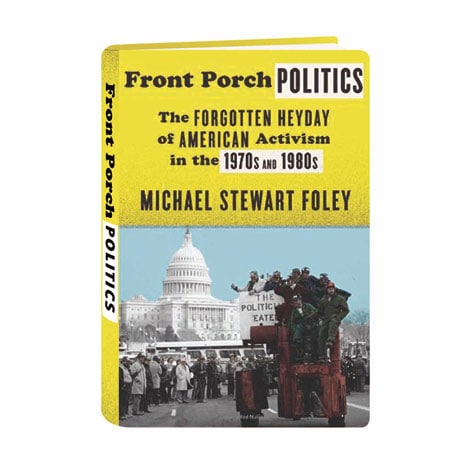 Front Porch Politics: The Forgotten Heyday of American Activism in the 1970s and 1980s

The 1960s are widely seen as the high tide of political activism in the United States, but as Michael Stewart Foley establishes here, the 1970s and 80s witnessed an unprecedented upsurge of innovative and impassioned grass roots political activity. In Southern California and on the Lower East Side of Manhattan, tenants challenged landlords with sit-ins and referenda; in the upper Midwest, farmers mobilized tractors to protect their land; and in the deindustrializing cities of the Rust Belt, laid-off workers boldly claimed the right to own their idled factories. Recalling Love Canal, the tax revolt in California, ACT UP, and other crusades famous or forgotten, Foley shows how Americans were propelled by personal experiences and emotions into the public sphere to contend with an immediate threat to their families, homes, or dreams.