The Big Sparkly Box Of Unicorn Magic: Phoebe and Her Unicorn Vol. 1-4 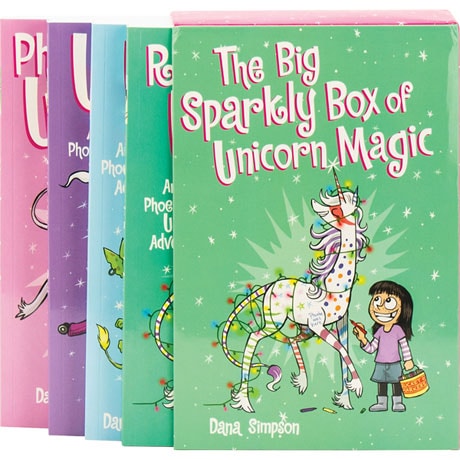 The Big Sparkly Box Of Unicorn Magic: Phoebe and Her Unicorn Vol. 1-4

After 9-year-old Phoebe skips a rock across a pond and hits the majestic face of Marigold Heavenly Nostrils, she is granted one wish: for the vainglorious unicorn to be her obligational best friend. Hilarious hijinks ensue as Phoebe and Marigold take on everything from school frenemies to goblin queens, and the unlikely duo forges a real connection as Phoebe basks in Marigold's radiant self-confidence, and Marigold comes to appreciate the freedom of human weirdness. First appearing in the comic strip Heavenly Nostrils, Dana Simpson's effervescent tales for readers 9 to 12 are collected here in a slipcased four volume set that includes Phoebe and Her Unicorn, Unicorn on a Roll, Unicorn vs. Goblins, and Razzle Dazzle Unicorn.