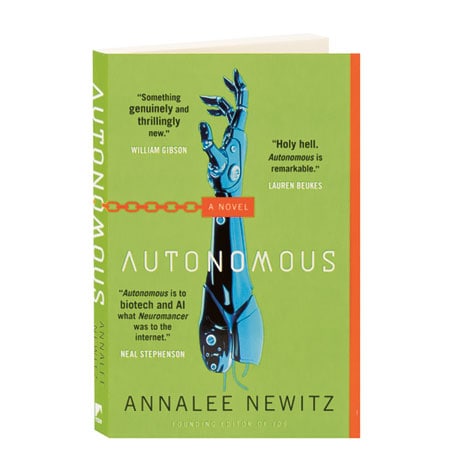 In the year 2144, Jack is a scientist turned drug pirate, a pharmaceutical Robin Hood in a submarine, fabricating cheap scrips for those who can't afford patented ones. But her latest drug hack has left a deadly trail, as people become addicted to work, doing repetitive tasks until they kill themselves or go insane. On her trail is an unlikely pair: Eliasz, a brooding military agent, and his robotic partner Paladin. As they race to stop information about the sinister origins of Jack's drug from getting out, they begin to form an uncommonly close bond that neither of them fully understands. This Lambda Award winning debut from science journalist Annalee Newitz, founder of the science and sci-fiblog io9, explores humanity, technology, and culture in a future where everything—and everyone—is a product.

"Autonomous is to biotech and AI what Neuromancer was to the Internet."—Neal Stephenson