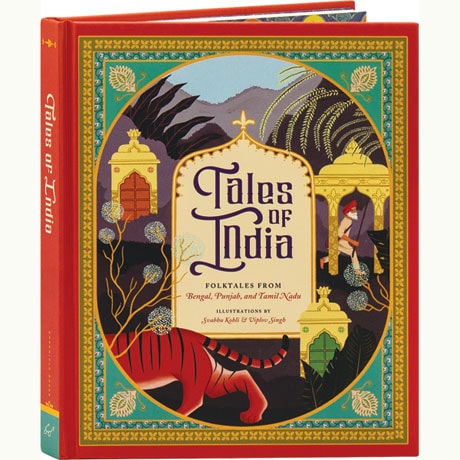 (series intro) There is a world of enchanting fairy tales and folklore beyond the familiar stories of Andersen, Perrault, and the Brothers Grimm. Likely to be unfamiliar and unforgettable, the tales in these treasuries for readers 8 to adult reflect the various cultures where they originated. Each story is set with a full-page color illustration, and the books feature embossed color covers, printed endpapers, and ribbon markers. (blurb) A worthy introduction to the beguiling world of Indian folklore, this collection of 16 traditional tales includes "The Bear's Bad Bargain," "The Son of Seven Mothers," "The Ghost Brahmin," and "The Rat's Wedding." Transcribed by Indian and English folklorists in the 19th century, these stories brim with wit and magic, epic quests and talking animals—plus an array of bold, inspiring heroines.