His Dark Materials: The Golden Compass; The Subtle Knife; The Amber Spyglass 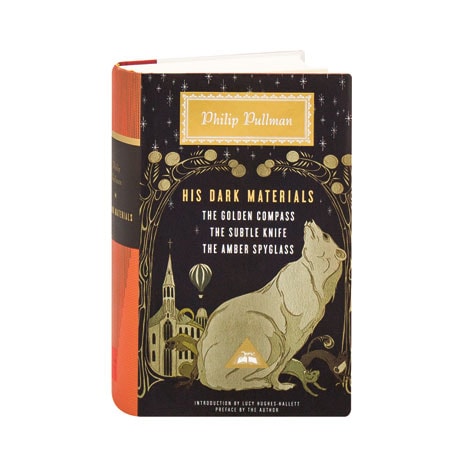 His Dark Materials: The Golden Compass; The Subtle Knife; The Amber Spyglass

In a trio of books for readers 10 to adult that have garnered the Guardian Prize, the Whitbread Book of the Year award, and the Carnegie Medal (and later the "Carnegie of Carnegies"), Philip Pullman gives us an epic adventure inspired by Milton's Paradise Lost, set in a world as thoroughly realized as Narnia or Middle Earth. It is a world much like ours and yet very different, where everyone has their own daemon—an animal manifestation of their soul—and witches, magical devices, and armored polar bears are real. Introduced by cultural historian and critic Lucy Hughes-Hallett, the three books are presented in this fine Everyman's Library edition, with cream stock pages, sewn binding, and a ribbon marker. "Once in a lifetime a children's author emerges who is so extraordinary that the imagination of generations is altered," noted New Statesman. "Lewis Carroll, E. Nesbit, C.S. Lewis and Tolkien were all of this cast. So, too, is Philip Pullman, whose Dark Materials trilogy will be devoured by anyone between 8 and 80. The most ambitious work since The Lord of the Rings, it is as intellectually thrilling as it is magnificently written."