Even Darkness Sings: From Auschwitz to Hiroshima: Finding Hope in the Saddest Places on Earth 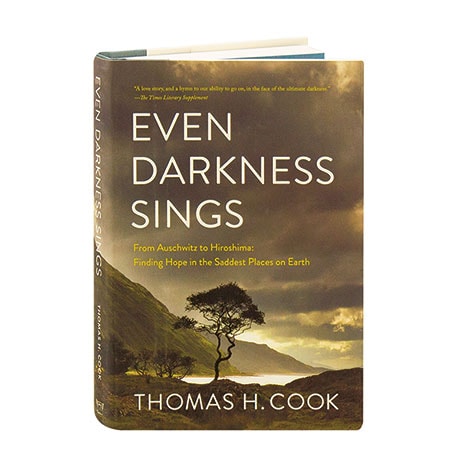 Even Darkness Sings: From Auschwitz to Hiroshima: Finding Hope in the Saddest Places on Earth

The death camp at Auschwitz and ground zero at Hiroshima; the battlefields of Verdun and the leper colony at Molokai—these are some of the troubling destinations that crime novelist Thomas Cook is drawn to, both for the powerful emotions they evoke and for what we can learn from them. These lessons are often unexpected and sometimes profoundly intimate, yet they are never straightforward, as in remote Lourdes, where so many hopeful pilgrims have sought healing, and Kamukura, where would-be mothers tend spiritual effigies of their lost children. In some two dozen engaging travelogues here, Cook contemplates a lifetime of such journeys.

"Cook doesn't reach for moral lessons in the awful past; instead they emerge tacitly from signs of life and compassion he discovers in the present. The result is a gripping exploration of how hope sprouts from despair."—Publishers Weekly

"Perhaps the season's most unlikely narrative turn. As Cook's journeys accumulate, a reader loses any trepidation about approaching these sites of sorrow, awakening instead to Cook's main purpose as the narrative acquires a humble gravitas. Cook promises that 'there is much to be gained where much has been lost, and we deny ourselves that bounty at the peril of our souls,' a truth to which this surprising volume attests."—NYTBR