Ike's Gamble: America's Rise to Dominance in the MIddle East 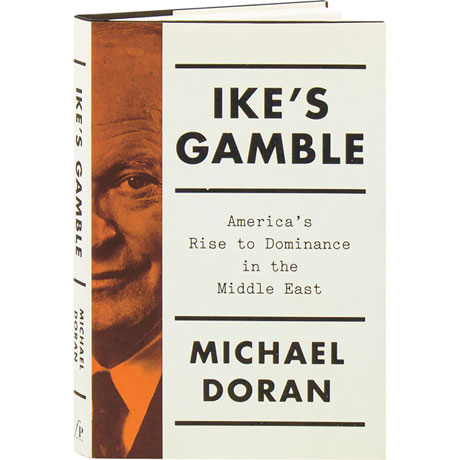 Ike's Gamble: America's Rise to Dominance in the MIddle East

In 1956, President Nasser of Egypt moved to take possession of the Suez Canal, prompting Britain, France, and Israel to defend it by force. Despite the special relationship between England and America, President Dwight Eisenhower intervened on Egypt's behalf. Revisiting the tense Suez Crisis, Michael Doran shows how Nasser worked to destabilize the Middle East, and stoked America's opposition to European colonialism to drive a wedge between Eisenhower and two British Prime Ministers, Winston Churchill and Anthony Eden. As Doran details here, Eisenhower eventually saw through Nasser's ploys, and—recognizing that Israel was his closest ally in the region—put America on the path to becoming the power broker in the Middle East.

"This book is subversively revisionist history with sharp relevance to the present…. [A] deeply researched, tightly argued and accessibly concise book…. [Doran ] writes with the authority of a scholar and the familiarity of a senior policy adviser."—NYTBR

"The failure of the British-French invasion of Egypt in 1956 was one of the seminal events of the second half of the twentieth century: it marked the end of Britain's and France's aspirations to world leadership. America's involvement is brilliantly described in Ike's Gamble, a thoughtful and articulate account of the evolution of America's role in that fateful period."—Henry A. Kissinger