Treasures Of British History: The Nation's Story Told Through Its 50 Most Important Documents 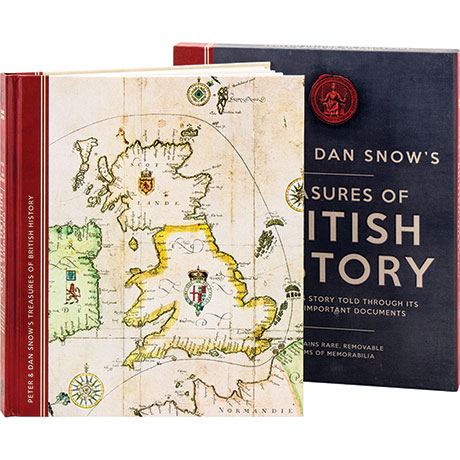 Treasures Of British History: The Nation's Story Told Through Its 50 Most Important Documents

A BBC journalist and presenter long associated with news analysis, Peter Snow teams with his son Dan (a historian and BBC commentator, as well as Peter's co-presenter for Battlefield Britain and 20th-Century Battlefields) to offer this visual, tactile history of their country, told through 50 key documents in a fine slipcased edition. The Domesday Book, Magna Carta, Shakespeare's King Lear, the Death Warrant of Charles I, Wellington's Waterloo dispatch, Churchill's "Finest Hour" speech, and even the 2014 ballot for Scottish independence appear here, seen in photos of the original documents, ten of which are presented as removable facsimiles.