My Fellow Americans: The Most Important Speeches of America's Presidents from George Washington to Barack Obama 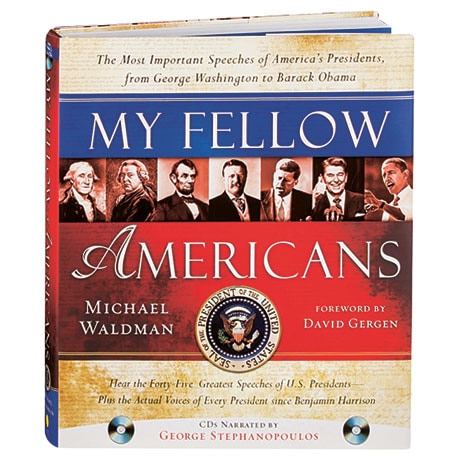 My Fellow Americans: The Most Important Speeches of America's Presidents from George Washington to Barack Obama

This album from former presidential speech writer Michael Waldman is a remarkable treasury of 45 of the greatest speeches ever given by American presidents, accompanied by recordings on two audio CDs. Here are the voices of every president since Benjamin Harrison, as well as readings of speeches from George Washington, Thomas Jefferson, Andrew Jackson, and Abraham Lincoln (with recorded notes by an eyewitness to the Gettysburg Address). In the book itself, Waldman introduces each speech, placing it in the contexts of both the president's administration and the historical moment, then provides the complete text. Here too are rare archival photographs, illustrations, and documents with handwritten notes.

"The early speeches—Washington's inaugural words, Lincoln's Gettysburg Address, Woodrow Wilson's WWI speech—are read credibly by actors. But this valuable collection really picks up steam with FDR, when the presidents themselves do the speaking. (Most of the recent presidents, with the exception of Jimmy Carter, have more than one speech included.) There will be those who may wish other speeches were added, but it's hard to quibble with those included: John F. Kennedy's words during the Cuban missile crisis, Lyndon B. Johnson's speech upon assuming the presidency, Ronald Reagan's speech calling on Mikhail Gorbachev to tear down the Berlin Wall. With introductions given for each speech—former Clinton aide [George] Stephanopoulos narrates the CDs—this collection is no less than a primer on U.S. history, and the ways issues of government, race and democracy have been viewed during the past 225 years. And there are some surprising moments as well: Richard Nixon's speech to his staff explaining his resignation from the presidency after Watergate shows an emotional side of Nixon rarely seen by the public."—Publishers Weekly