Words That Ring Through Time 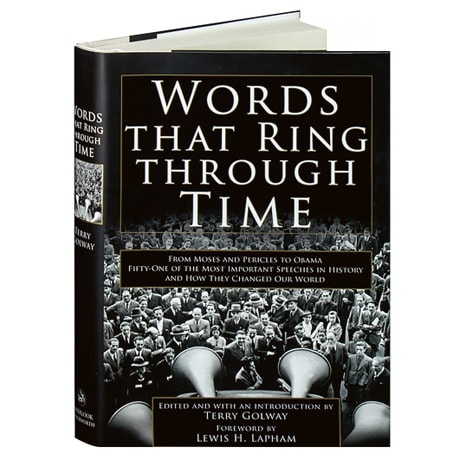 Words That Ring Through Time

From Moses the Lawgiver to Nelson Mandela—both of whom were orators whose words helped lead their people to freedom—this book collects speeches that had the power to change the world, including examples from Cicero, Jesus, Muhammad, Thomas More, Elizabeth I, Oliver Cromwell, George Washington, Robespierre, Thomas Jefferson, Napoleon Bonaparte, Karl Marx, Abraham Lincoln, Winston Churchill, Adolf Hitler, Ho Chi Minh, Nikolai Khrushchev, John F. Kennedy, Barack Obama, and many others. Also the author of For the Cause of Liberty and Let Every Nation Know, Terry Golway introduces each selection with an essay setting it in its historical context and detailing its impact and consequences.

"The drama and power of the speeches in this book is made accessible by Terry Golway's quick and clear introductions to them. They supply the context we need to experience the force and importance of these epoch-marking orations."—Nicholas von Hoffman.