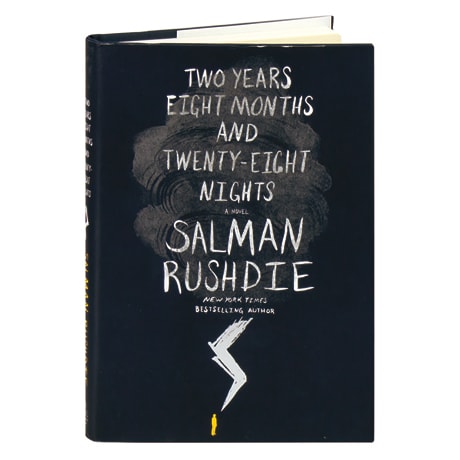 In his tenth novel, following The Enchantress of Florence, Salman Rushdie blends history, mythology, and a timeless love story set in a near-future age of unreason. Following a strange storm in New York City, everyday people awaken to strange powers, little guessing that they are the many offspring of a capricious jinn princess named Dunia and a mortal man of reason. The line between worlds is about to be breached on a grand scale, and over the following two years, eight months, and 28 nights—a thousand and one nights—Dunia's children will all play roles in an epic war between light and dark. In this enormous upheaval, beliefs are challenged, words act like poison, silence is a disease, and a noise may contain a hidden curse. Inspired by traditional "wonder tales" of the East, Rushdie's novel is satirical and bawdy, full of cunning and folly, rivalries and betrayals, kismet and karma, rapture and redemption.

"In these nested, swirling tales, Rushdie conjures up a whole universe of jinn slithering across time and space, meddling in human affairs and copulating like they've just been released from twenty years in a lamp.... Two Years Eight Months and Twenty-Eight Nights translates the bloody upheavals of our last few decades into the comic-book antics of warring jinn wielding bolts of fire, mystical transmutations and rhyming battle spells."—Washington Post

"Replete with fantastical creatures, scary monsters, very bad men (or rather, male jinns/genies) and one heroic woman.... While Rushdie has written hyped up sagas of worlds colliding before, and always espouses reason over fanaticism, there is something so loopy, so unleashed, about this tale as to make it particularly thrilling."—NYDaily News

"A rambunctious, satirical, and bewitching metaphysical fable, perhaps his most thoroughly enjoyable to date.... Rushdie is having wickedly wise fun here."—Booklist (starred review)