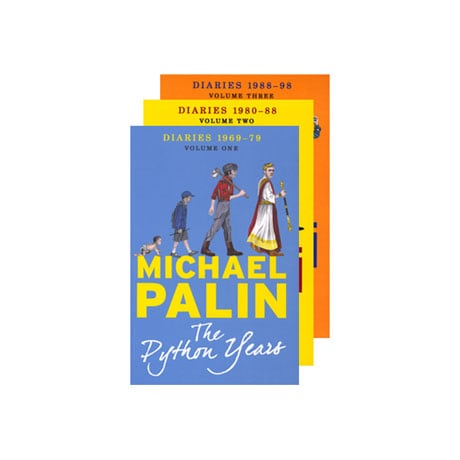 Throughout his years in Monty Python, his appearances in films like Time Bandits and A Fish Called Wanda, and his travels to all corners of the globe with a BBC film crew, one constant in Michael Palin's life was his daily ritual of writing in his diary. Published in three chunky volumes spanning three decades at the height of his career, his diaries are illustrated with color photos and presented here in a handsome slipcased edition. Volume One: 1969–79 opens as Palin—still a new father and struggling to make a name for himself in television comedy—describes the first day of filming what will be Monty Python's Flying Circus. Volume Two: 1980–88 follows his trail through seven movies, up to preparations for the documentary that would redefine his career, Around the World in Eighty Days. Volume Three: 1988–98 tracks Palin's journeys to far-flung places, not to mention more films, award-winning TV roles, and a first novel, Hemingway's Chair.

"Delightful and often extraordinarily funny.... An entertaining and at times deeply moving read."—Mail on Sunday (London) on The Python Years

"It's clear why [John] Cleese later nominated Palin as his luxury item on Desert Island Discs because, whether exploring the Pacific Rim or jogging round Hampstead Heath, he makes such unfailingly good company.... This is the agreeably written story of how a former Python laid the foundation stone by which he would reinvent himself as a public institution: the People's Palin."—Guardian (London) on Halfway to Hollywood

"The life it records is so phenomenally varied ... how he finds time to update his diary is a mystery. Update it he does though and he does so with fluency, wit, glowing affability and lightning flashes of anger.... Weaving between observation and introspection, he comes up with a pithy phrase to describe everything from a Suffolk sunset to the end of apartheid but he sparkles most brightly when evoking the speech and the personality of his associates."—Sunday Express (London) on Travelling to Work