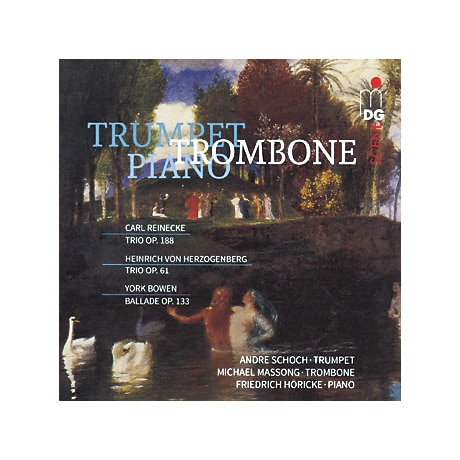 Making the most of an unfortunately small repertoire, trumpeter Andre Schoch, trombonist Michael Massong, and pianist Friedrich Höricke perform the Trio in A Minor, op. 188, of Carl Reinecke (1824–1910), a piece whose contrasting movements seem designed to bring out the best in these instruments. Often compared to his friend Johannes Brahms, Heinrich von Herzogenberg (1843–1900) wrote his Trio in D Major, op. 61, to evoke the sounds of the hunt and the great outdoors; the resulting piece is an utterly original tone poem. This German trio also plays York Bowen's (1884–1961) World War II–era Ballade, op. 133, originally scored for oboe, horn, and piano, but transposed here; with a style of its own, the single-movement work nonetheless looks back to the dramatic chamber works of the late 19th century.