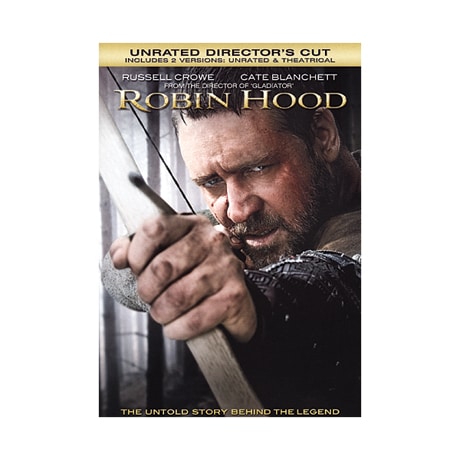 Bringing a sense of historical reality to the English legend and silver screen tradition, Russell Crowe is Robin Hood, a crusader whose willingness to speak frankly to King Richard the Lionheart (Danny Huston) lands him in the stockade. When Richard is assassinated, however, Robin escapes but finds himself at odds with the new king's henchman Godfrey (Mark Strong), who is secretly facilitating the French king's plans to attack England. In the nation's time of need, Robin unifies the troops for a do-or-die struggle against the invaders beneath the Cliffs of Dover. Cate Blanchett is a nuanced, delightfully nontraditional Maid Marion, and the rest of the strong cast includes Max Von Sydow, Oscar Isaac, William Hurt, Eileen Atkins, Matthew Macfadyen, and Léa Seydoux. This edition includes the 2010 movie as it appeared in theatrical release as well as the unrated, director's cut, in which Ridley Scott's original vision for the film is more fully realized.

"Grown-up but not too serious; action-packed but not juvenile.... Not only is this the mullet-free Robin Hood movie we've been waiting decades for, it's also Ridley Scott and Russell Crowe at their most entertaining since Gladiator."—Empire