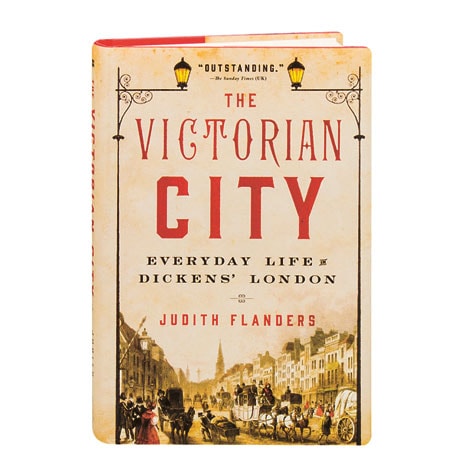 The 19th century was a time of unprecedented change, and nowhere was this more apparent than London; in only a few decades, the capital grew from a compact Regency town into a sprawling metropolis of more than six million inhabitants, the largest city that the world had ever seen. Perhaps no figure embodied the era more than Charles Dickens, and here the author of The Making of Home and The Invention of Murder looks at the city through his eyes, leading us through the markets, transport systems, sewers, rivers, slums, cemeteries, gin palaces, chop-houses, and entertainment emporia of Dickens' London, to reveal the Victorian metropolis in all its variety, vibrancy, and squalor. Along with a listing of Dickens's published works, this history includes 16 pages of color reproductions, with numerous black and white illustrations and maps interspersed throughout the book.

"[Flanders's] imagery is often intense and striking…. The streets of London were a constant assault on the senses with their noise and smell. This is a superb portrait of an exciting, thriving, and dangerous city."—Booklist (starred review)

"Flanders uses secondary historical sources alongside Dickens's own impressions of the city to take us on a dazzling journey through an imperial city plagued by poverty and deeply divided by class…. Shying away from academic pretension, Flanders tells the epic story of this biggest and boldest Victorian city in all its complexity, with verve, color and a straightforward approach to language that still manages to give a voice to ordinary Londoners—something Dickens would no doubt approve of."—NPR