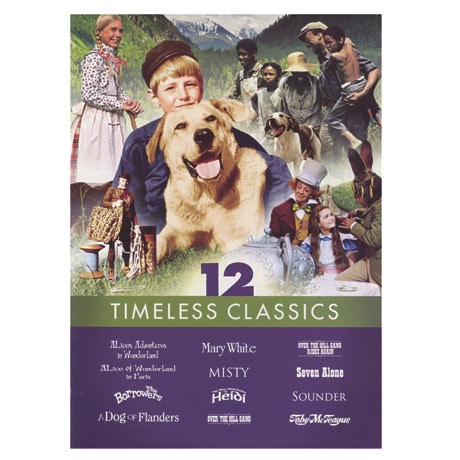 A treasure trove for kids or the young at heart, this set contains a dozen classic family films on three discs, among them the 1973 Academy Award nominee Sounder, a touching tale of a black sharecropping family during the Depression; The New Adventures of Heidi, with Katy Kurtzman in the title role and Burl Ives as her grandfather; and 1961's Misty, Marguerite Henry's classic tale of two orphans who befriend a wild horse on the island of Chincoteague. The 1966 cartoon Alice of Wonderland in Parisis paired here with the 1972 British musical Alice's Adventures in Wonderland, starring Peter Sellers as the March Hare and Dudley Moore as Dormouse. Other selections here include The Borrowers, The Over the Hill Gang, and the 1978 Emmy winner Mary White. 3 DVDs (17 hrs 35 mins.)