Time Out Of Joint 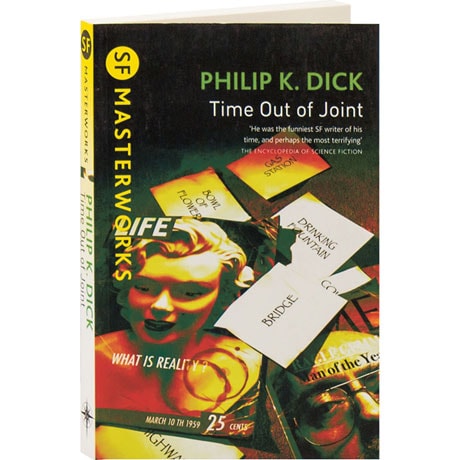 Time Out Of Joint

Ragle Gumm is an ordinary man leading an ordinary life, except that he makes his living by entering a newspaper contest every day—and winning, every day. But in this sixth novel from Philip K. Dick, first published in 1959, Gumm gradually begins to suspect that his life is an illusion, constructed around him for the express purpose of keeping him docile and happy. And if that is the case, what is his real world like—and what is he actually doing when he thinks he is guessing "Where Will the Little Green Man Be Next?" Inducted posthumously into the Science Fiction Hall of Fame—and the first science fiction writer to be included in the Library of America—Dick wrote visionary tales, inspiring major films and teleplays like Blade Runner, Minority Report, and The Man in the High Castle. Though he struggled to support himself through most of his career, his work has finally become more available, and we are pleased to offer some of his most notable novels and stories.