Face To Face: The Photographs of Camilla McGrath 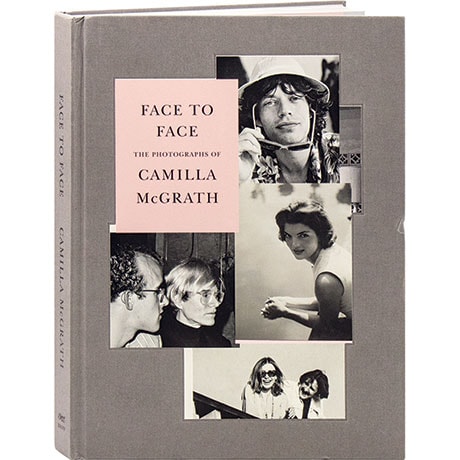 Face To Face: The Photographs of Camilla McGrath

No Reviews Write the First Review
Item #: D21989
Format: Hardcover
Pages: 352
Publication Date: 2020
Publisher: Knopf
ISBN: 9780525656463
Italian countess Camilla Pecci Blunt grew up surrounded by art and artists between Rome and New York, where her mother owned galleries. After marrying record executive and art curator Earl McGrath in 1963, they welcomed an extraordinary mix of famous and talented people into their home, and Camilla captured the essence of their personalities on film in casual, playful moments. END_OF_DOCUMENT_TOKEN_TO_BE_REPLACED
Add to Wish List

"A gorgeous, jet-set testament to the delicious depth of the McGraths' personal address book…. The book documents the warm, relaxed intimacies of Keith Haring, Andy Warhol, Mick Jagger, and Paloma Picasso at a birthday party for Jerry Hall in 1985; the Dunnes (that's Joan Didion and John Gregory) at Thanksgiving in 1992; the Agnellis on their yacht; Jackie and Lee on a sisterly trip to Italy; Peter Beard in the Hamptons; Harrison Ford chatting up Carrie Fisher in a doorway; and the carousing of everyone from New York's Frank O'Hara to Los Angeles's Sharon Tate. Examining Camilla's tender, unassuming portraits, one doesn't get the sense of a predatory paparazzo behind the lens, but rather a close friend shooting someone in a moment of letting their guard down. These are larger-than-life figures brought down to coffee-table size."—Interview