Daring Young Men: The Heroism and Triumph of the Berlin Airlift, June 1948–May 1949 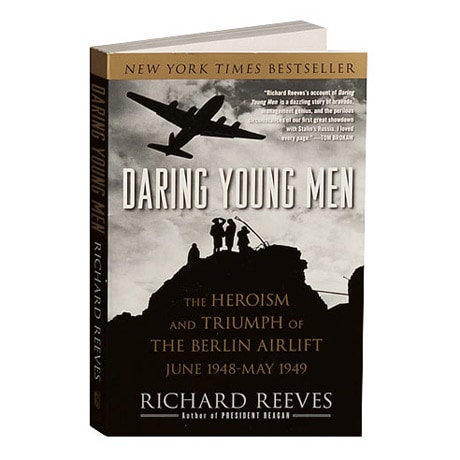 Daring Young Men: The Heroism and Triumph of the Berlin Airlift, June 1948–May 1949

In the early hours of June 26, 1948, phones began ringing across America, waking up the airmen of World War II—pilots, navigators, and mechanics—who had only just begun having normal lives with new houses, new jobs, and new families. Some were given just 48 hours to report to local military bases; President Truman was recalling them to active duty to try to save the desperate people of West Berlin, blockaded by Josef Stalin's Red Army. The biographer of presidents Reagan, Nixon, and Kennedy here gives us a gripping history of Truman's Berlin Airlift, focusing on the men who fought this first battle of the Cold War.

"[Richard Reeves] takes a closer look at the courageous young American and British pilots who, in order to bring food, fuel, and medicine to a Berlin blockaded by Russia, flew aging cargo planes into Soviet airspace in the fragile post-WWII years. Vying with the West for control of Berlin and Germany, Stalin choked off the defeated German capital with 400,000 Red Army soldiers, and the Washington hawks called for war with Moscow. But Truman, whom Reeves calls a hero for persevering against skeptics, pursued the airlift instead. Using diaries, letters, and government documents, Reeves shows the suffering of the vanquished German people, the calculated coldness of Soviet officials, and the individual pilots who risked their lives to save their former enemies. This probing book reveals the intricate talks that led to the unraveling of Stalin's demands, the partitioning of Germany, and the creation of NATO. Reeves gives us a mesmerizing portrait of America at its best when challenged by Russia's tyranny."—Publishers Weekly (starred review)