The Far Side of the World: An Aubrey & Maturin Adventure 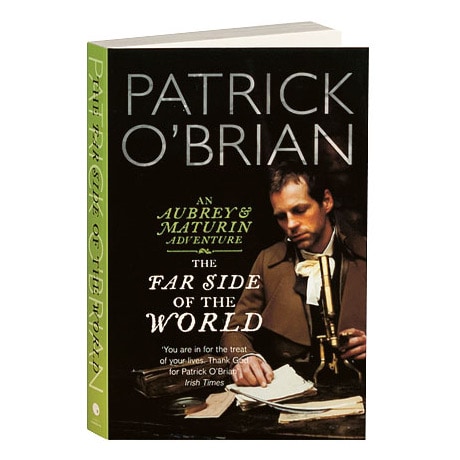 The Far Side of the World: An Aubrey & Maturin Adventure

The War of 1812 continues, and Jack Aubrey sets course for Cape Horn on a mission after his own heart: intercepting a powerful American frigate outward bound to play havoc with the British whaling trade. Stephen Maturin has fish of his own to fry in the world of secret intelligence. Disaster in various guises awaits them in the Great South Sea and in the far reaches of the Pacific: typhoons, castaways, shipwrecks, murder, and criminal insanity. This is the tenth book in the series. Captain Jack Aubrey of the Royal Navy and ship's surgeon (and British spy) Stephen Maturin have been described as "better than Holmes and Watson, the equal of Quixote and Panza" (Los Angeles Times). Set in the time of Lord Nelson's Navy, their chronicles are at once stirring adventure tales, detailed historical fiction, and action thrillers par excellence. "Taken as a whole, the Aubrey-Maturin novels are by a long shot the best things of their kind," hailed the New York Times Book Review. "So much better than the competition that comparisons long ago ceased to be relevant: they are uniquely excellent."

"These eccentric, improbable novels seem to have been written by Patrick O'Brian to please himself in the first instance, and thereafter to please those readers who may share his delight in precision of language, odd lands and colors, a humane respect for such old-fashioned sentiments as friendship and honor. Like Aubrey and Maturin playing Mozart duets beneath a Pacific moon, he works elegant variations on the tradition of the seafaring adventure story."—NYTBR