From Rocks to Rockets: A Humorous History of Warfare 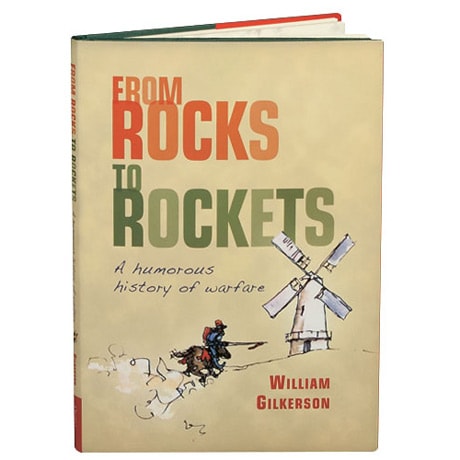 From Rocks to Rockets: A Humorous History of Warfare

As a boy William Gilkerson—now a painter, sailor, historian, and winner of Canada's Governor General's Literary Award—used to draw little soldiers, an addiction that led to this tongue-in-cheek history of man's combative prowess over the millennia. Originally published in 1963, Gilkerson's book for all ages tells how cavemen with rocks evolved into soldiers with rockets, while all along we have been perhaps tilting at windmills. Straight-faced irony is in the text—"All these new weapons enabled the peoples who owned them to take other, less fortunate peoples under their protection"—while slapstick humor abounds in Gilkerson's precise miniature tableaux.

"From Rocks to Rockets is both a sweeping and sobering overview of humanity's insatiable appetite for death and destruction. So why am I still smiling?"—David Macaulay