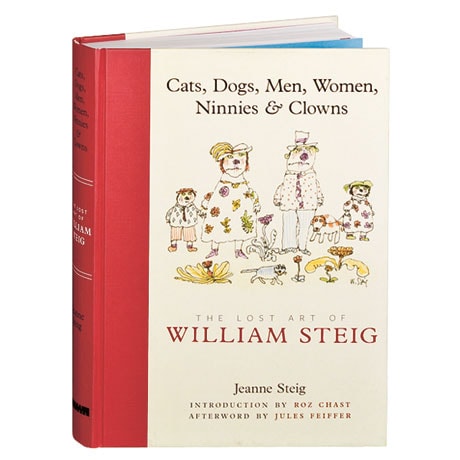 A brilliant cartoonist who produced more than 2600 drawings (including 117 covers) for The New Yorker, William Steig (1907–2003) is better known among children for such books as Shrek! and the Caldecott Medal winner Sylvester and the Magic Pebble. His doodle-like art was sometimes enigmatic, often bizarre, yet Steig was a master at capturing essential relationships and attitudes—the intense frown of a canine artist contemplating his subject (a bone), for example, or the apprehension of a fleshy damsel approached by a rough beast with a bearded man's head. In this glorious treasury Steig's widow Jeanne bestows upon us more than 450 previously unpublished cartoons by her husband, and offers personal insight and anecdotes about his work and their relationship. "Steig's drawings throw open a bunch of windows and let in some fresh air, for which I am deeply grateful," writes fellow New Yorker cartoonist Roz Chast in her introduction. "He saw the world of human beings as absurd, hilarious, terrifying, mystifying, and infinitely worth observing."

"A treasure trove ... this compendium is organized thematically (people, dogs, 'odd ducks,' etc.); the late Steig's wife, Jeanne, introduces each section with delightful, insightful anecdotes. 'He used to refer to us fondly as "a couple of cats," or perhaps more romantically as "two rolls on a plate",' she writes. Of course, the best sense of the man behind Shrek!, Sylvester and the Magic Pebble, and other favorites is gained from the strange, free, and wholly original artwork that fill the pages with caricatured portraits, animals a-courting, drunken clowns, knife fights, and creatures impossible to name. Taken as a whole, the glorious lunacy is testimony to a true iconoclast."—Publishers Weekly (starred review)