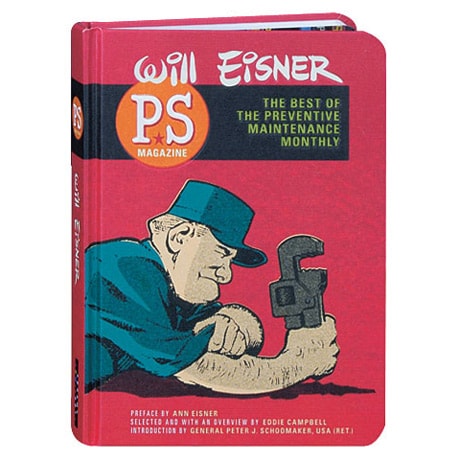 Best known for his influential comic book series The Spirit and his groundbreaking graphic novel A Contract with God, Will Eisner also put in 20 years producing PS magazine for the U.S. Army. From 1951 to 1971, Eisner's monthly supplement to the Army's standard technical manuals taught American soldiers about the importance of care and maintenance for vehicles, aircraft, firearms, and electronics, and illustrated these vital lessons with drawings, pin-ups, step-by-step guides, and comic strips. This collection contains the best of Eisner's 227 issues of PS, reproduced in color at their original size, and provides the "missing link" in his career between his early comic books and his later graphic novels.

"From explaining how to load a truck correctly to why it won't start, Eisner used a combination of humor, sound technical writing, and graphic storytelling to educate the soldiers. His magazines could be found at the front lines, in the officer's mess, and in the quarters of senior military officials. It featured a cast of recurring characters like the loveable Joe Dope and the voluptuous Connie Rodd, who headlined featured segments like 'Joe's Dope Sheet' and the provocatively named 'Connie Rodd's Briefs.' With Eisner's wonderful artwork and clarity of style making sometimes difficult concepts easy to understand, it's no wonder PS magazine was so popular with military personnel. A fascinating document for both fans of Eisner and military history buffs."—Publishers Weekly