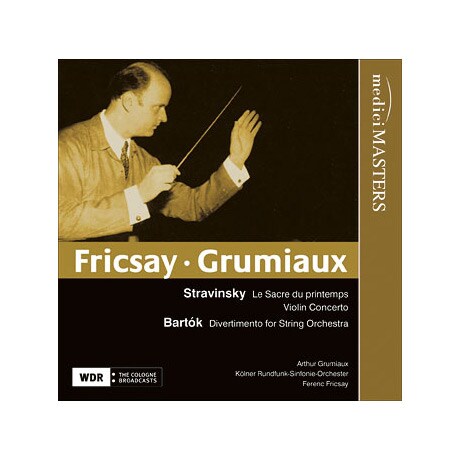 Under Ferenc Fricsay, Belgian virtuoso Arthur Grumiaux (1921–86) performed Igor Stravinsky's neo-baroque Violin Concerto at a 1951 concert with the Cologne West German Radio Orchestra. On May 4, 1953, the Hungarian conductor led the same orchestra in an idiomatic rendition of Béla Bartók's Divertimento for String Orchestra; later that October, he led them in a superbly delineated version of Stravinsky's Rite of Spring, rooted in nature.

"Fricsay (1914–1963) proves a compelling advocate [for the Divertimento] … and has the strings … caught up in the emotional turmoil. The finale is full of impetuous energy…. The 'local colour' of the rhythms is obviously led by a native and the orchestra responds as a mix of gypsy band and symphony orchestra…. Fricsay and the orchestra produce a bright and incisive accompaniment in which Grumiaux—beautifully balanced—is 'first among equals'."Classical Source