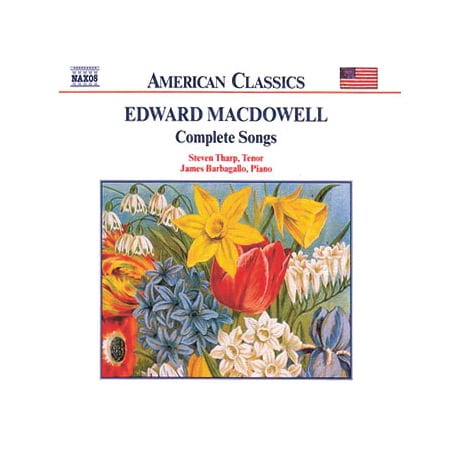 In these settings of English, Scottish, and German verse, American composer Edward MacDowell (1860–1908) continues the German lieder tradition in which he had been trained in Frankfurt. The earliest of his songs, from 1883, are full and opulent, but he soon began subordinating the piano score to the vocal line. Among the 42 selections here are "Sunrise," "Thy Beaming Eyes," "Tyrant Love," "Nachtlied," "Midsummer Lullaby," and "As the Gloaming Shadows Creep." Tenor Steven Tharp was likened to Fritz Wunderlich by Classical Music, the Listener's Companion, while for this disc and several other recordings, Marina and Victor Ledin were nominated for the Best Classical Producer Grammy Award in 2000.

"MacDowell appears to have taken after his teacher Joachim Raff, in an idiom that sets its sights on making life a little more pleasant, and that is no bad thing; nor is it reprehensible to write melodiously for the voice and modestly for the piano. Both performers serve him well, the tenor being clear and well defined in tone and enunciation, the pianist (a former Tchaikovsky Competition Bronze Medalist) bringing an entirely sympathetic touch. They suggest the idiom well in the opening items and maintain it right through to their welcome of spring (‘Merry Maiden Spring', Op. 58 No. 3) at the end."—Gramophone