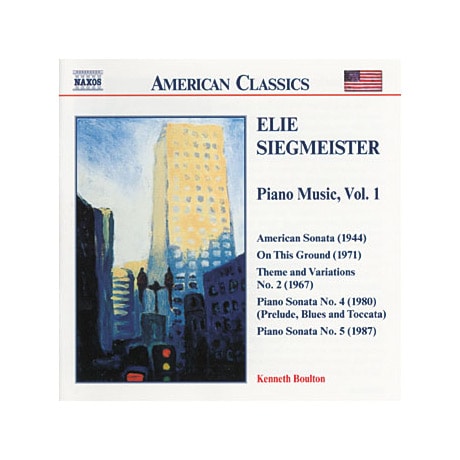 One of America's preeminent composers, Elie Siegmeister (1909–91) found in the piano a potent vehicle for creative expression. He called his American Sonata of 1944—the first of five major sonatas for solo piano—"an American panorama, blending jazzy and folk-like themes with purely classical form." Other pieces include On This Ground (a five-movement tribute to Americana), Theme and Variations no. 2, Piano Sonata no. 4 ("Prelude, Blues and Toccata"), and Piano Sonata no. 5.

"Every so often … Siegmeister surprises you with frisky arpeggiated figures that sparkle from both hands in all directions. The works on this disc reveal the full scope of the composer's severe, uncompromising style together with his wistful, populist persona. Kenneth Boulton makes the best possible case for this undervalued repertoire…. Boulton's unbridled dance through the lively finale [of the Fifth Sonata] takes top honors.... Treasurable piano playing. Strongly recommended. 10/10 (Highest Rating)."—ClassicsToday