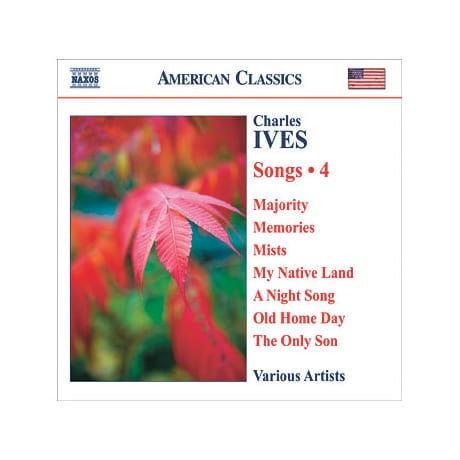 Beginning with the Utopian "Majority" and ending with the atmospheric "Over all the Treetops" (set to a text by Harmony Twichell, later Mrs. Ives), this collection also includes the lovely and intimate "Maple Leaves," "Mirage," "Mists," "A Night Song," "An Old Flame," and "Marie," as well as "My Native Land," which is performed by three different singers. Richard Whitehouse's notes are excellent on all of the songs. Before Ned Rorem, Ives (1874–1954) was the most distinctive and important composer of art songs in America. This musical visionary continually broke with European models to create a highly personal form of musical expression. This disc is part of a set collecting his nearly 200 songs, set to verses by poets ranging from Shakespeare, Goethe, Keats, and Byron to Whitman and Kipling, with many original texts as well.

"Gardner begins Vol. 4 with the epic philosophical declamation 'The Majority'…. This was the first song of Ives's privately published 114 songs in 1922—everyone was totally baffled."—Gramophone

"Every disc is replete with the special pleasures of Ives' art. Hymn-tunes, patriotic songs, and chaos abound…. The performances … featuring about two dozen singers, a number of pianists and assorted instrumentalists, are ardent, committed, and expressive."—Sequentia