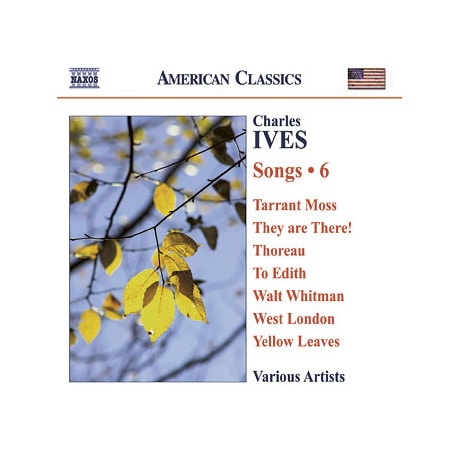 This final volume in Naxos's alphabetical survey of Charles Ives's songs takes us from "Tarrant Moss" through "Yellow Leaves" and includes his 1913 setting of "Watchman," used also in his Fourth Symphony. In 1917, he wrote "He Is There" (from Vol. 3 of this series) in response to World War I and later reworked the music as "They Are There" (heard here) in 1942 in response to World War II (both have his own texts and quote from the National Anthem). Other selections include "Two Slants (Christian and Pagan)," "Thoreau," "Vote for Names! Names! Names!" "Tolerance," and "West London." Before Ned Rorem, Ives (1874–1954) was the most distinctive and important composer of art songs in America. This musical visionary continually broke with European models to create a highly personal form of musical expression. This disc is part of a set collecting his nearly 200 songs, set to verses by poets ranging from Shakespeare, Goethe, Keats, and Byron to Whitman and Kipling, with many original texts as well.

"Maintains a remarkably high standard of both accuracy and sympathy, as well as of recording quality, despite being the product of many sessions involving some 16 singers, four pianists and other instrumentalists."—BBC Music