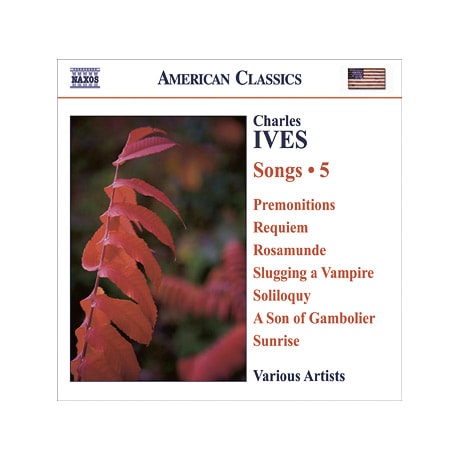 Before Ned Rorem, Charles Ives (1874-1954) was the most distinctive and important composer of art songs in America. This musical visionary continually broke with European models to create a highly personal form of musical expression. In nearly 200 songs, he set verses by poets ranging from Shakespeare, Goethe, Keats, and Byron to Whitman and Kipling, with many original texts as well. Some of his best-known songs include "Shall We Gather at the River," "The Cage," "General William Booth Enters into Heaven," and "The Side Show."

"'A Son of a Gambolier' (a riotously funny 1895 song with a fascinating piano line) backs tenor MacPherson with a piano, violin, piccolo, two trombones, and four kazoos. Such additions make this set indispensable for Ives fans."—Fanfare

"The warm mezzo of Tamara Mumford makes a good impression, not least in the visionary 'Sunrise'."—BBC Music