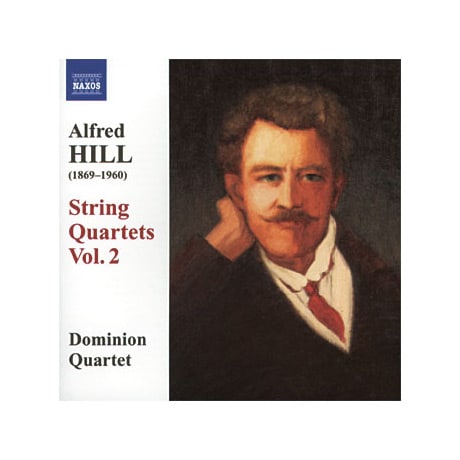 Trained in Europe, Alfred Hill (1869–1960) nonetheless made his name in New Zealand and his native Australia; he remains best known for his string quartets, all composed in a fluid, late Romantic style. As heard in the three selections here, the slow movement of Quartet no. 4 hints at the influence of Edward Elgar, and Quartet no. 6 ("The Kids") has a distinctly 19th-century tone, while Quartet no. 8—a world premiere recording—marks the beginning of a new sound world, with hints of the Impressionists' musical language and a rather English-sounding finale. Hill's trademark slow movement gems remain a feature in all three quartets, with the outer movements offering both finesse and memorable melodies. Devoted and inspired interpreters, the New Zealand–based Dominion String Quartet has recorded all 17 quartets by Australasia's first internationally acclaimed composer.

"The Sixth Quartet, titled 'The Kids,' was intended for Hill's music students at the New South Wales Conservatorium. Working within self-imposed limitations, both technically and musically, the composer achieves some minor miracles, especially in the harmonic quicksand of the work's first 13 bars. Only the stony-hearted could not be swept away by its rollicking Scherzo. The 1934 Eighth Quartet is made of sterner stuff. Both its harmonic language and its structural ingenuities create a sense of questing and inspire some of the finest playing on the disc, showcased in Wayne Laird's exemplary production."—New Zealand Herald

"Hill had the singular virtue of knowing when to stop, so his movements rarely drag. His tunes are good, and plentiful…. By 1934 (the date of the Eighth), Hill's work had begun to catch late, reflected echoes of the Debussy Quartet (1893), though you can also hear some Debussy in the Fourth Quartet (1916), as well as some Haydnesque moods all through. One movement here is based on a theme from a very well known Classical masterpiece (try the Scherzo of the Sixth Quartet, all of which has fun with Classical models). But towering over Hill's other models, shading even the Grieg influence, is the Dvorák 'American' Quartet…. Hill's individuality shines through (the Fourth in C Minor is a strong piece on its own terms, with a feisty Rondo finale)."—Fanfare