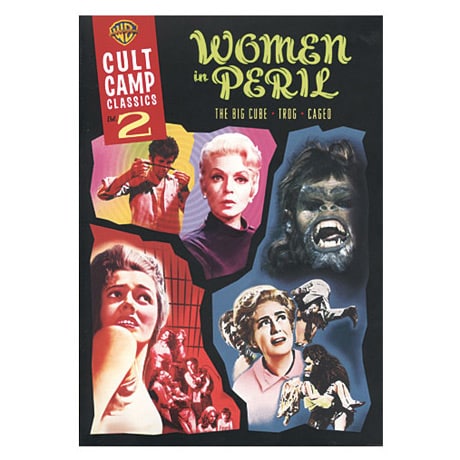 (Academy Award nominee included)Two female screen legends are seen in late-career roles in this campy collection. Joan Crawford's last feature film, Trog (1970), concerns her thwarted research on a half-man/half-ape throwback ("troglodyte") discovered in an English cave. In The Big Cube (1969), a still-glamorous Lana Turner is victimized by a malevolent George Chakiris when he slips her some LSD at a rock-and-roll party. The 1950 women's prison film Caged is of a different order altogether. Both lead actress Eleanor Parker (as a teenage innocent who becomes a hardened criminal) and supporting actress Hope Emerson (as a sadistic guard) were Oscar nominees, and the screenplay was nominated as well. Agnes Moorehead plays the concerned but ineffectual warden.

"Writer Virginia Kellogg spent time behind bars to research this women-in-prison saga [Caged], which won Parker an Oscar nomination as the teenager who's jailed for a crime committed by her man, has his baby while she's inside, and winds up a hard case."—Time Out

"An oddball mix of horror, psychedelia and melodrama that somehow works as a solid night of campy entertainment. As we've come to expect with Warner, the transfers are all top-notch, making the viewing experience all the more pleasurable."—DVD Drive-in