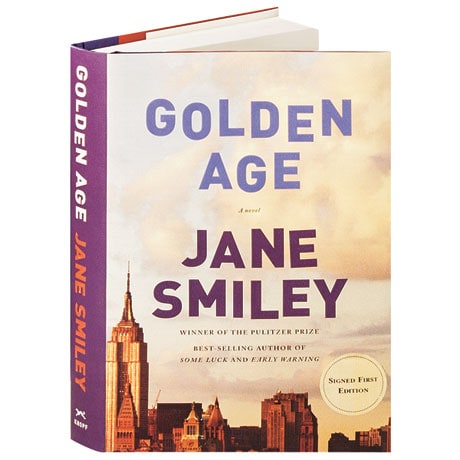 (First Edition, Autographed) The author of the Pulitzer Prize winner A Thousand Acres here completes the Last Hundred Years trilogy, following up Some Luck and Early Warning to bring the remarkable Langdon family into our present times and beyond. Golden Age opens in 1987, as the next generation of Langdons faces economic, social, political, and personal challenges unlike anything their ancestors could have imagined. Michael and Richie, the rivalrous twin sons of World War II hero Frank, work in the high-stakes world of government and finance in Washington and New York, but they soon realize that one's fiercest enemies can be closest to home; Charlie, the charming, recently found scion, struggles with whether he wishes to make a mark on the world; and Guthrie, once poised to take over the Langdons' Iowa farm, is instead deployed to Iraq, leaving the land that has always been at the heart of this story in the capable hands of his younger sister. And as they enter into the 21st century, all of the Langdon women—wives, mothers, daughters—find themselves charged with carrying their storied past into an uncertain future. We are offering Jane Smiley's magnificent conclusion to her century-spanning portrait of an American family in a first edition with a tipped-in autograph page.

"Smiley has subtly yet pointedly linked forces political, technological, financial, and social to personal lives, tracing in the most organic, unobtrusive, yet clarifying manner the enormous changes that have taken place over the last century.... Smiley revels in the blissfulness of being, celebrating the glory of horses, the good company of dogs, the sweet astonishment of quickening life and newborn babies, the sheltering intimacy of a loving marriage, the pleasure of solitude.... She sustains an enthralling narrative velocity and buoyancy, punctuated with ricocheting dialogue, as she creates a spectacular amplitude of characters, emotions, and events. Sensuousness, dread, recognition, shock, sorrow, mischievous humor, revelation, empathy—all are generated by fluid, precisely calibrated prose, abiding connection to the terrain she maps, fascination with her characters, and command of the nuances of the predicaments. Each novel is a whole and vital world in its own right, and together the three stand as a veritable cosmos as Smiley makes brilliant use of the literary trilogy—the ideal form for encompassing the breadth and depth of our brash, glorious, flawed, precious country."—Booklist (starred review)