Nature's Nether Regions: What the Sex Lives of Bugs, Birds, and Beasts Tell Us About Evolution, Biodiversity, and Ourselves 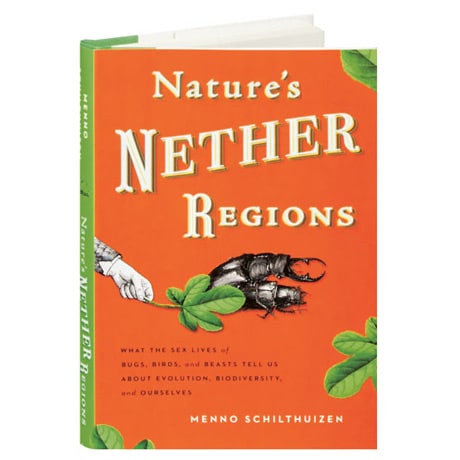 Nature's Nether Regions: What the Sex Lives of Bugs, Birds, and Beasts Tell Us About Evolution, Biodiversity, and Ourselves

What's the easiest way to tell species apart? Check their genitals, notes Menno Schilthuizen. A research scientist at the Netherlands' National Museum of Natural History in Leiden, Schilthuizen invites readers to join him as he uncovers the many ways in which the shapes and functions of genitalia have been molded by complex evolutionary struggles.

"The science of genitals is a relatively new field for biologists, who have long overlooked the evolutionary importance of species' private parts. Biologist Schilthuizen balances the silly and the serious to describe researchers' latest efforts to understand how 'evolution has graced the animal kingdom with such a bewildering diversity of reproductive organs.' Schilthuizen tours some of nature's weirdest inventions, such as the chicken flea penis, which is 'actually a profusion of plates, combs, springs, and levers' and looks like 'an exploded grandfather clock'."—Scientific American