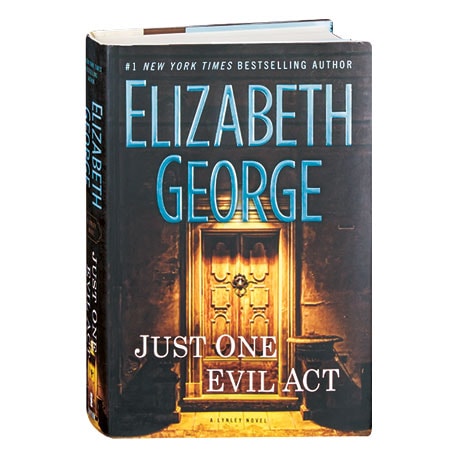 In this 18th novel of Elizabeth George's Agatha and Anthony Award–winning mystery series (following Believing the Lie), Inspector Lynley's partner Barbara Havers steps up to help her friend, science professor Taymullah Azhar. His daughter Hadiyyah has been taken by her mother, and because they never married, Azhar's name is not on the child's birth certificate and so he has no legal claim. Barbara volunteers to investigate as a private detective, but the trail goes cold. Then the mother reappears with shocking news: Hadiyyah has been kidnapped from an Italian marketplace. Barbara risks her Scotland Yard career to intervene in the Italian investigation, and she and Lynley soon discover that the case is far more complex than it seemed.

"George is a master of the wily plot and the timely tossed out red herring.... George's fans will be glad to see Havers back in action, even though, as ever, she's quick to land in trouble. And as for Lynley—well, he's as cool as ever, in more than one sense of the word."—Kirkus Reviews

"This riveting tale of love, passion, and betrayal ... spotlights Det. Sgt. Barbara Havers. Taymullah Azhar, a science professor who's a friend and neighbor of Havers in North London, is devastated to come home one day and discover that his nine-year-old daughter, Hadiyyah, and most of her possessions are gone. Hadiyyah's mother, Angelina Upman, to whom Azhar was never married, has decamped to Italy with the girl. A grateful Azhar accepts Havers's offer to act as a private detective, though her superiors resist her request for a leave of absence. Months later, when kidnappers take Hadiyyah from Angelina in an Italian marketplace, Lynley travels to Lucca, Tuscany, to look into the matter. Havers later goes AWOL to Lucca, where she seizes the initiative in the case and risks her career to persuade Scotland Yard to get involved. Fully realized Italian characters, from a lover whose face cannot hide his emotions to the charming Chief Insp. Salvatore Lo Bianco, add to the rich ensemble cast. Series fans will enjoy following Lynley and Havers on their first investigation outside the U.K., while newcomers will be just as enthralled."—Publishers Weekly (starred review)