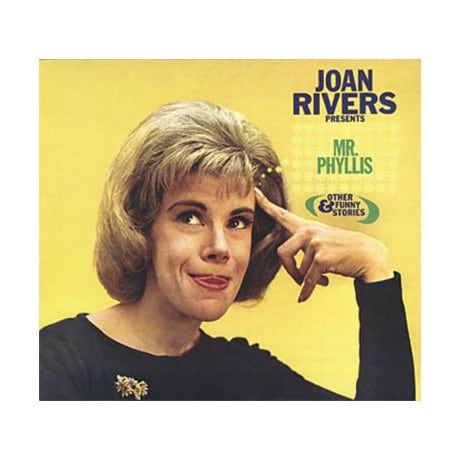 Long before she was a scathing critic of celebrity fashions, Joan Rivers was a pioneering stand-up comedian, with her unsparing wit making her a fixture on late-night television. On this 1967 debut comedy album, Rivers regales an audience with her accounts of being an overweight child who could represent all three Magi in a school Christmas play; enduring with a fatalistic crew a terrifying airline flight to Cleveland; moving into a sketchy New York apartment building; and visiting a "wig farm," where she is tempted to purchase the runt of the litter.

"There's a well-honed sense of the absurd in the material on Mr. Phyllis that's a far cry from Rivers' best-known work; the wigs that have lives of their own, the alcoholic dogs, and the families whose names change pronunciation with their income are just surreal enough to recall Woody Allen's early standup routines…. The razor-sharp timing and the unrelenting pace of Rivers' delivery were already very impressive indeed, and if she dishes more on herself than anyone else here, she did so with the bloody skill of a trained surgeon."—Allmusic.com