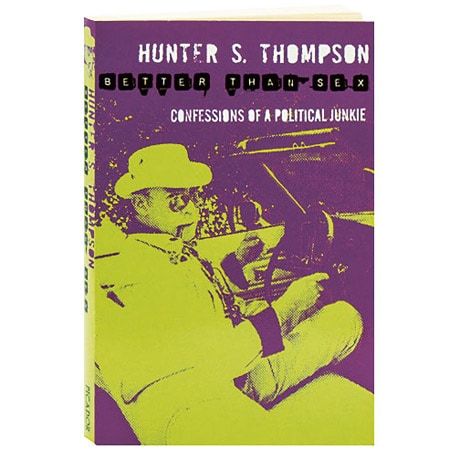 A worthy follow-up to his 1972 classic Fear and Loathing on the Campaign Trail, this fourth and final volume of The Gonzo Papers sees Hunter S. Thompson hitting the trail again in the run-up to the 1992 presidential elections—this time without leaving his fortified compound in Woody Creek, Colorado. Even so, Thompson manages to deliver a mind-bending view of the campaign—in all of its horror, sacrifice, lust, and dubious glory—including faxes to and from candidate Bill Clinton's top aides and gonzo screeds on Richard Nixon, George Bush, and Oliver North. Also including The Great Shark Hunt, Generation of Swine, and Songs of the Doomed, the four-volume series known as The Gonzo Papers encompass most of Thompson's post-1970s literary output, variously gathering early newspaper and magazine pieces, excerpts from books published and unpublished, columns from the San Francisco Examiner, and nearly all of his short pieces for Rolling Stone, where he remained on the masthead as chief of the National Affairs Desk.

"[Thompson] delivers yet another of his trademark cocktail mixes of unbelievable tales and dark observations about the sausage grind that is the U.S. Presidential sweepstakes.... Packed with egocentric anecdotes, musings and reprints of memos, faxes, and scrawled handwritten notes."—LADaily News

"At some point, people as diverse as John Wayne and the members of Aerosmith appeared to achieve a kind of wisdom when they began to parody themselves. There are hints in Better Than Sex that HST is winking—broadly—at us. Sure, he's still a vicious, twisted psychotic thug who can write that Richard Nixon was criminally insane from birth, but he also closes any number of preposterous gonzo screeds with the equally preposterous, 'Take my word for it, Bubba. I was there.' This is Thompson's take on Clinton's campaign and his first year in office—and it's an outrage per page. Nobody escapes the good doctor's wrath: Bush is so guilty he makes Nixon look innocent; Clinton is a swine, but he's our swine; and Hillary is pilloried. Ross Perot, James Carville, Margaret Thatcher, James Baker III, Al Gore, and even Walter Cronkite also get savaged. Along the way, Thompson ruminates, occasionally quite shrewdly, nearly always hilariously, on politics, society, and, of course, himself."—Booklist