Boundless: Tracing Land and Dream in a New Northwest Passage 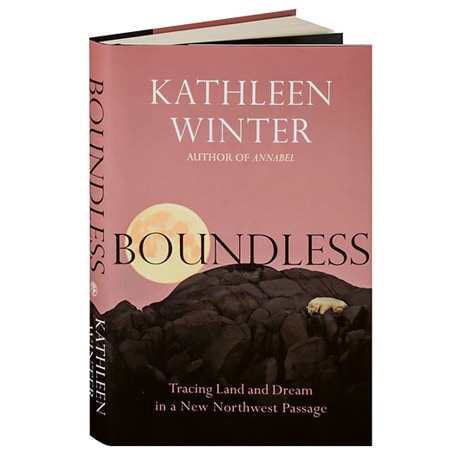 Boundless: Tracing Land and Dream in a New Northwest Passage

In this nonfiction follow-up to her Orange Prize and Governor General's Literary Award finalist Annabel, transplanted Canadian author Kathleen Winter impulsively embarks on an odyssey across the increasingly less-frozen Northwest Passage. Traveling among marine scientists, historians, archaeologists, anthropologists, and curious passengers, from Greenland to Baffin Island, she bears witness to the new North, where polar bears mate with grizzlies, creating a new hybrid species; where the earth will soon yield so much buried treasure that five nations stand poised to claim their rights to it; and where the Inuit population struggles between taking part in the new global economy and defending their traditional way of life.

"The vessel's tight quarters give Winter plenty of room to observe her companions, and the result is an intriguing chronicle of a journey through the Northwest Passage.... Her ability to toggle between nature writing and personal reflection will keep readers following in her wake."—NYTBR

"[A] profound and lyrical memoir of a transformative journey.... Of all the kindred spirits Winter meets on this extraordinary journey, she writes most powerfully of the land."—Publishers Weekly (starred review)

"Perceptive and thoughtful, Winter's ruminations on Arctic life and its continuous clashes with modern civilization are compelling and thought-provoking. The north is a place rarely visited and little understood, but it looms ever larger in our collective future, and to ignore it and its people would be an act of global arrogance."—Booklist (starred review)