Leaving Before the Rains Come 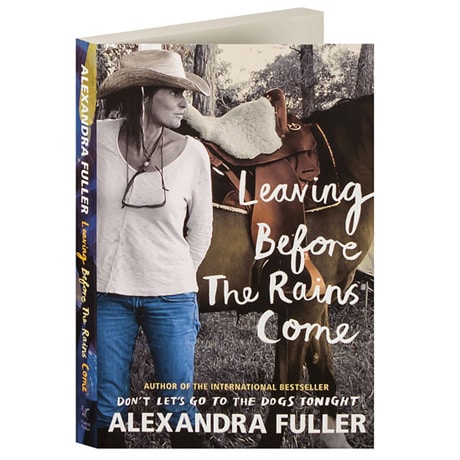 Leaving Before the Rains Come

Looking to rebuild after a painful divorce, memoirist Alexandra Fuller—who also gave us Don't Let's Go to the Dogs Tonight and Cocktail Hour Under the Tree of Forgetfulness—turns to her African past for clues to living a life fully and without fear. A child of the Rhodesian wars and of two deeply complicated parents, Fuller is no stranger to pain, yet the disintegration of her own marriage leaves her shattered. Picking up the pieces of her life, she confronts tough questions about her past, about the American man she married, and about the family she left behind in Africa. Fuller soon realizes that what is missing from her life is something that was always there: the brash and uncompromising ways of her father, "Tim Fuller of No Fixed Abode," a man who regretted nothing and wanted less, even after fighting harder and losing more than most men could bear. Fuller's writing is superb, threading panoramic vistas with personal revelations as a fully grown woman and mother. After spending a lifetime fearfully waiting for someone to show up and save her, she discovers that, in the end, we all have to save ourselves.

"Fuller writes with ferocity and precision, and she turns the story of her marriage and its disintegration into a resonant parable about a couple's mismatched views of the world."—NYTimes

"On the surface, it is the story of the end of a marriage. It is not, however, a divorce memoir, nor is there much of the misery about it. Instead, Ms. Fuller has stitched together a patchwork of anecdotes and emotions spanning two continents—the Africa of her early years and the America of her adult life—and many generations of variously mad and sad ancestors in an attempt to make sense of it all. Her writing is astoundingly good; she loops forwards and backwards in time and place, but there is not a spare word in the book. Every story earns its right to be there."—Economist (London)