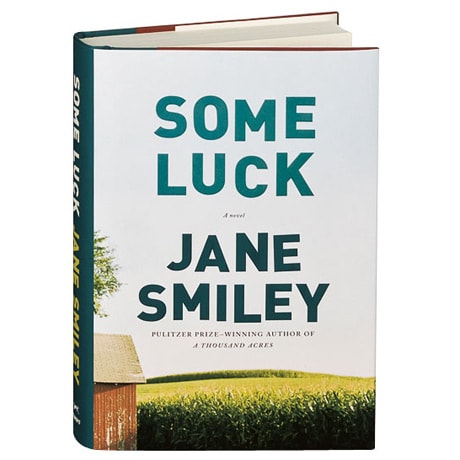 (Nominated for the 2014 National Book Award) Earning starred reviews from Library Journal, Booklist, Publishers Weekly, and Kirkus Reviews, this novel from the Pulitzer Prize–winning author of A Thousand Acres is the first in a trilogy about 100 years in the Langdon family. Some Luck begins in 1920, in Denby, Iowa, as farmers Walter and Rosanna Langdon abide by time-honored values that they pass on to their five wildly different children: Frank, the brilliant, stubborn first-born; Joe, whose love of animals makes him the natural heir to his family's land; Lillian, an angelic child who enters a fairy-tale marriage with a man only she will fully know; Henry, the bookworm who's not afraid to be different; and Claire, who wins the highest place in her father's heart. Each chapter covers a year, through 1953, taking us through cycles of births and deaths, passions and betrayals, among characters we come to know inside and out.

"Marvelous.... Some Luck opens in 1920 with Walter Langdon on the eve of his 25th birthday, thinking about the vicissitudes of farming; his strict father; his wife; and his five-month-old son—the first of five children who grow into memorable individuals over the course of the novel. With her vivid, tactile depiction of rural Iowa farm life, Smiley has imaginatively recaptured the dangers and rewards—the play of good luck and bad luck—in a lost way of life.... Some Luck moves swiftly and assuredly through 33 years of the Langford clan's experiences, [becoming] an exploration of 20th-century American culture and politics. Smiley says the novel's velocity arises from the year-by-year approach she deploys throughout the trilogy. She says she began with the concept of the trilogy but ended up being swept away by the trajectories of her characters. She writes about farm life, family life and, suggestively, near the end, national political life. There are farming scenes, sex scenes, combat scenes and table-talk scenes.... Wherever Smiley goes in Some Luck ... readers will willingly follow. Then wait, with bated breath, for her next steps."—BookPage