1944: FDR and the Year that Changed History 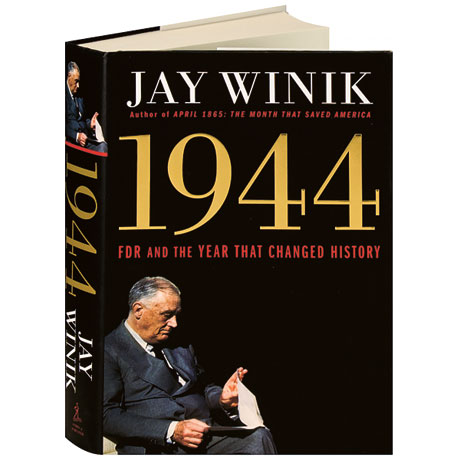 1944: FDR and the Year that Changed History

It was not inevitable that World War II would end as it did, or that it would even end well, argues the author of April 1865 and The Great Upheaval in this chilling account of a momentous year. In 1944, the Allies might have been stymied, and Hitler might have cemented his waning power; instead, he was successfully overthrown, but at a fateful cost. Jay Winik takes us into the Roosevelt Administration, where FDR was at the pinnacle of his wartime leadership even as his health was rapidly deteriorating. Faced with mounting evidence of the deliberate and accelerating genocide of Europe's Jews, FDR was forced to decide on their fate: Was winning the war the best way to rescue them? Was a rescue even possible? Or would it get in the way of defeating Hitler? Winik chronicles these events with moral clarity and a sweeping perspective, offering a moving appreciation of the extraordinary struggles of the era's outsized figures.

"An accomplished popular historian unpacks the last full year of World War II and the excruciatingly difficult decisions facing Franklin Roosevelt.... Winik asks whether, by focusing so wholly on winning the war, Roosevelt missed 'his own Emancipation Proclamation moment,' the chance to make the war about something bigger, specifically 'the vast humanitarian tragedy occurring in Nazi-controlled Europe.'... The author's fair assessment of the evidence, detailed scene-setting, deft storytelling, and sure-handed grasp of this many-stranded narrative will inspire any reader to rethink this issue. Do we ask too much of Roosevelt or too little? A complex history rendered with great color and sympathy."—Kirkus Reviews (starred review)

"Jay Winik is a master of the annus magnus school of history, in which the past can best be fathomed and told by ferreting out individual seminal years.... His riveting story of the abject moral indifference to what we now know was good enough evidence of what was going on at such places as Auschwitz and Treblinka makes his indictment all the more powerful."—National Review