Lady Bird and Lyndon: The Hidden Story of a Marriage that Made a President 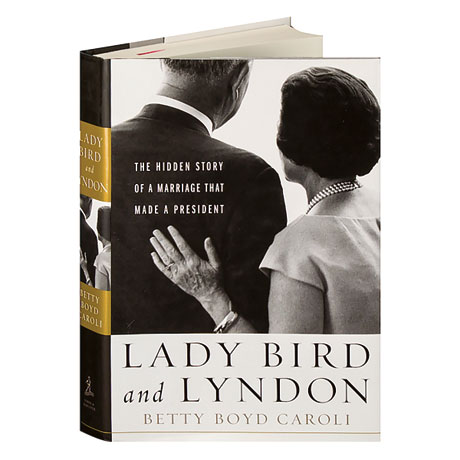 Lady Bird and Lyndon: The Hidden Story of a Marriage that Made a President

The conventional story goes that Lyndon Johnson married Lady Bird for her money and demeaned her by his many affairs, and that her only legacy was protecting the nation's wildflowers. But here the author of First Ladies and The Roosevelt Women gives us a very different view of this quietly remarkable woman, and the partnership she formed with the talented but vulnerable Johnson. Betty Boyd Caroli reveals how, from the beginning, they understood that he would satisfy her ambition for the world, while she would save him from his weaknesses; again and again, Lady Bird kept Johnson from quitting, often stepping in to call a key donor, campaign in hostile territory, or jumpstart him out of paralyzing depression.

"The spouses of the world's most influential movers and shakers rarely receive similar attention to their lives, regardless of the influence they may have had, but biographer Caroli bucks the trend with this enticing and fun examination of Claudia Alta Taylor 'Lady Bird' Johnson.... Johnson changed the role of First Lady forever, and Caroli's well-researched work gives readers insight into that shift."—Publishers Weekly (starred review)

"Our idea of Claudia Taylor Johnson as an autonomous individual—someone with great ambition and intellect as well as great compassion and poise—is underdeveloped to say the least. How well do we know the woman who was courted by LBJ and bolstered him as he fought his way up the political ladder to the U.S. House of Representatives, the Senate, and the Presidency? Betty Boyd Caroli dispels any notion of Lady Bird as LBJ's doormat."—Austin Chronicle

"Caroli fills out the portrait of a pragmatic political partnership emphasizing Lady Bird Johnson through many letters unavailable to researchers until 2013, using analysis by historians and details of important face-to-face, email, and telephone interviews with those who understood the dynamics of the marriage of Lyndon B. Johnson and Lady Bird.... Caroli's suggestion and amplification of a virtual pact teased out of Lyndon and Bird's correspondence during a very brief courtship frames the story of this alliance."—Library Journal