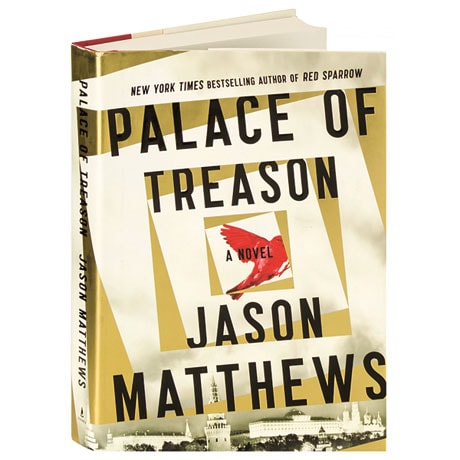 If anything, this sequel from retired CIA officer Jason Matthews is even more gripping than his widely praised Red Sparrow. Captain Dominika Egorova has returned to Moscow, though in reality she is working for the CIA as their deepest mole in Russia's SVR intelligence service. Serving under her psychotic boss, she will survive an Iranian assassination attempt, escape a counterintelligence ambush, and smuggle another agent out of Russia. But Dominika may be undone by her overwhelming passion for her CIA handler Nate Nash—particularly after she endures a chilling private conversation in her nightgown with President Putin—and the revelation that an SVR mole has discovered her name on a CIA resource list.

"On a scale of one to five stars, Palace of Treason is a six.... Jason Matthews has resurrected the spy novel from the doldrums of silly car chases, martinis shaken not stirred, and dubious tradecraft to reflect the deadly serious stakes of the new Cold War."—NYJournal of Books

"Matthews's characters are intensely sympathetic or stupendously vile; and the writing is entrancing in its exactitude and dark fluidity. With escalating dramatizations of intelligence work noble, nefarious, and absurd; horrifying scenes of intimate violence; interludes of perilous lust; and unnervingly prescient, headline-matching incidents, Matthews' latest is an extraordinarily commanding, acidly relevant, and unrelentingly suspenseful tale of espionage, brutality, and conscience."—Booklist (starred review)

"You'll never see Vladimir Putin in the same light after reading this chilling portrait. Matthews's characters seem to leap out of the page; his firsthand familiarity with the toys and routines of the spy world is a definite plus. Seldom is a sequel as stunning as the original, but this one absolutely triumphs."—Library Journal (starred review)