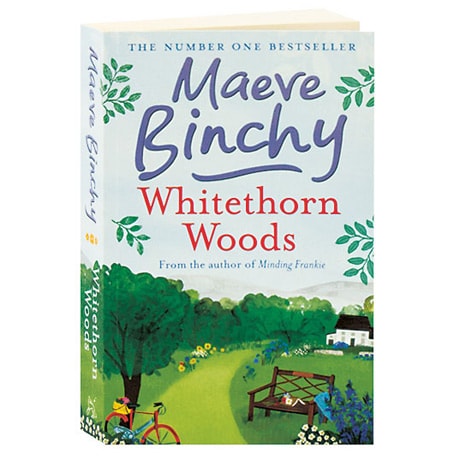 This novel from the much-missed Irish storyteller Maeve Binchy takes us to the charming town of Rossmore. Though it has grown a bit crowded since the days when everyone knew everyone else, it is still a place of miracles, particularly for those who visit the well of St. Ann at the edge of Whitethorn Woods, where people pray or make wishes or simply look back at the pretty little town. When a much-needed new road threatens to come through the woods—and St. Ann's Well—Rossmore itself is divided over the issue, and in Binchy's wondrous storytelling, while the outcome is little in doubt, the crisis affords an opportunity to look into the interwoven lives of her delightful characters.

"A proposed highway near the Irish town of Rossmore will mean the destruction of St. Ann's Well, a shrine in Whitethorn Woods thought to deliver healing, husbands and other miracles. The shrine resides in the parish of Fr. Brian Flynn, curate of St. Augustine's. As a fracas erupts between shrine skeptics who want the highway and shrine believers who want the shrine preserved, Flynn, unsure of where he stands on the issue and questioning his place in an increasingly secular Ireland, goes to the shrine and prays that he might 'hear the voices that have come to you and know who these people are.' Binchy goes on to deliver just that: a panoply of prosaic but richly drawn first-person characters, such as Neddy Nolan, a not-so-simple simpleton; 60-something Vera, who finds love on a singles trip meant for those much younger; and unassuming antiques magnate James, whose wife of 26 years is dying. Stories of greed, infidelity, mental illness, incest, the joys of being single, the struggles of modern career women, alcoholism, and the heartbreak of parenting span generations, simply and poignantly. Binchy takes it all in and orchestrates the whole masterfully."—Publishers Weekly