One Peace at a Time 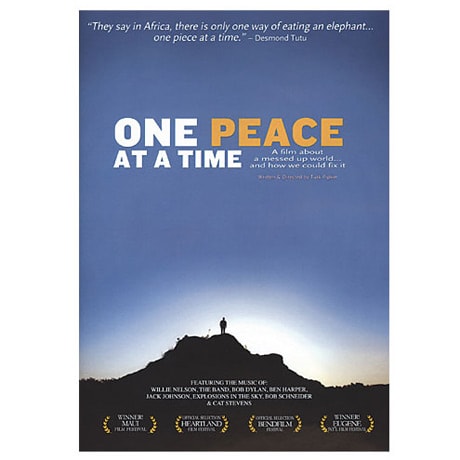 One Peace at a Time

(Winner of the Audience Award for World Cinema Documentary at the Maui Film Festival) In the documentary Nobelity, Turk Pipkin analyzed some of the world's most pressing problems, while this inspirational 2009 sequel demonstrates how solutions are being found and implemented in such locales as India, Thailand, Kenya, and the Himalayas. Nobel Laureates Muhammad Yunus, Steve Chu, and Desmond Tutu are interviewed here, as Pipkin addresses topics ranging from family planning to orphanages, and from water shortages to housing. This "provocative and important" (Vancouver Sun) film also features the music of Willie Nelson, Bob Dylan, Cat Stevens, and Ben Harper.

"[This film] overflows with good suggestions of ways to become part of the world's solutions and manages to do it with crisp imagery, terrific music ... and a positive tone that neither excoriates viewers for their inactivity nor sugarcoats the predicaments. The film seeks to inspire, and that it does."—The Austin Chronicle