Remains of the Day; Sense and Sensibility: Double Feature 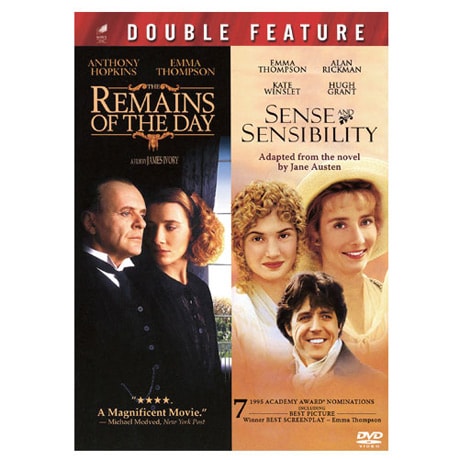 Remains of the Day; Sense and Sensibility: Double Feature

(Academy Award Winner Included (Sense and Sensibility)/Best Writing, Screenplay Based on Material Previously Produced or Published) In 1993, Anthony Hopkins and Emma Thompson worked with the Merchant/Ivory team on a critically acclaimed adaptation of Kazuo Ishiguro's profound novel about a butler who questions his wartime sacrifice. The Remains of the Day was called "magnificent" and given five stars by the New York Post, and was nominated for eight Oscars, including Best Picture. "Full of feeling without being sentimental," wrote the New York Times "Here's a film for adults.... Ivory is one of our finest directors." Thompson won an Oscar in 1996 for her screenplay for Sense and Sensibility; with a lead quartet of Thompson, Alan Rickman, Kate Winslet, and Hugh Grant, this captivating treatment of Jane Austen's romantic comedy swept the Top 10 lists, won a Golden Globe for Best Picture, and was nominated for six more Academy Awards, including Best Picture.