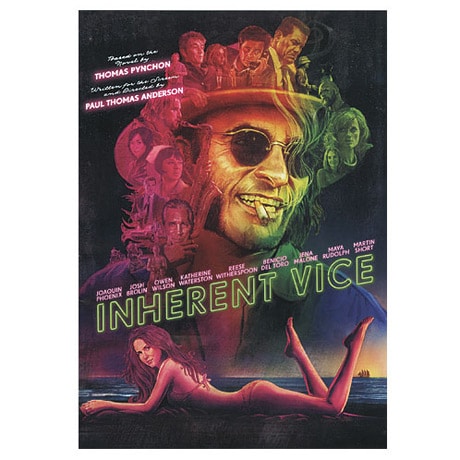 In late-1960s Los Angeles, private eye Doc Sportello (Joaquin Phoenix) is asked by his ex-girlfriend Shasta (Katherine Waterston) to protect her new lover—billionaire realtor Mickey Wolfmann (Eric Roberts)—from being abducted and committed to an asylum, in this 2014 adaptation of Thomas Pynchon's darkly comic novel. If that wasn't enough, the stoner sleuth is also handling a case that involves a member of the Black Guerilla Family trying to track down a white supremacist who owes him money, and at the same time, investigating a lethal international drug cartel called the Golden Fang. All three cases are somehow connected, and for Sportello, things are about to get very, very complicated. The colorful cast includes Benicio Del Toro, Reese Witherspoon, Martin Short, and indie rocker Joanna Newsom, while the soundtrack is by Radiohead guitarist Johnny Greenwood, who also scored Paul Thomas Anderson's There Will Be Blood.

"This movie is so distinct from everything and everyone else, and watching it is like encountering a higher order of filmmaking, more advanced and evolved.... I can't wait to see it again."—Guardian (London)