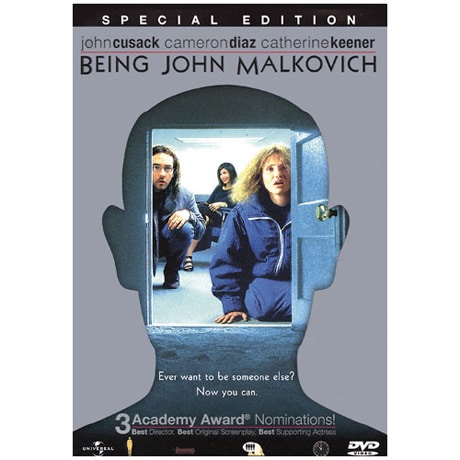 (Winner of the BAFTA Award for Best Original Screenplay/Charlie Kaufman; Nominated for 3 Academy Awards: Best Director, Screenplay, Supporting Actress (Catherine Keener) Down on his luck and unhappily married, puppeteer Craig Schwartz (John Cusack) takes a menial office position that changes his life when he discovers a secret door behind a filing cabinet that gives him access to John Malkovich's brain. Soon Schwartz, his pet-obsessed wife Lotte (Cameron Diaz), and his attractive co-worker Maxine (Catherine Keener) are locked in a power struggle to control the actor's body, a comic conflict that soon becomes a ménage à trois. Easily one of the most delightfully surreal romps to come out of Hollywood in recent decades, this 1999 film co-stars John Malkovich as himself, in one of his rare humorous roles; look for Sean Penn and Charlie Sheen in memorable cameos. This Special Edition includes five featurettes and an interview with Spike Jonze.

"Rare is the movie where the last half hour surprises you just as much as the first, and in ways you're not expecting. The movie has ideas enough for half a dozen films, but Jonze and his cast handle them so surely that we never feel hard-pressed; we're enchanted by one development after the next."—Roger Ebert